Prediction for Gold at close 3 April

No Change. Stay with full Gold allocation in portfolio.
THIS WEEK we include the quarterly long term gold chart with risk weight from 1971 to 31/March 2020. 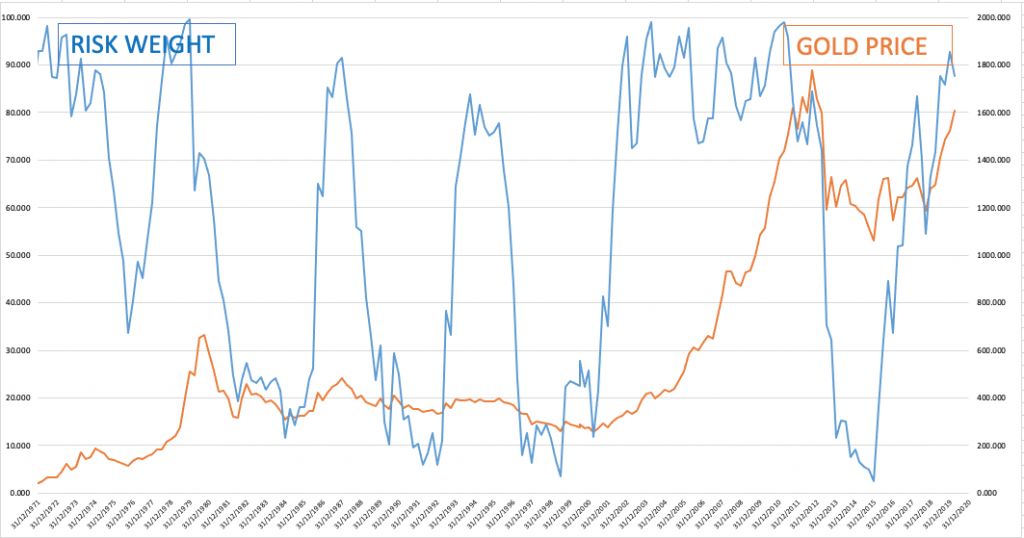 The quarterly gold chart, which only registers quarter end price data, shows a lot of interesting information. Of course one should never trade on this type of chart alone as signals would be much delayed and a position could last a generation or more, but it can give very interesting warning signals if shorter time frames go to extremes in tandem with a Supercycle. This chart tells us that the upside is still huge even though risk weight sits at 87. It is the framework as a whole in which risk weight behaves that shows the true risk and this chart cannot be seen separate from Monthly and even Weekly time frames. What becomes very clear from this Long term quarterly chart is that risk weight often goes to extremes and this can last for for many many years. And if a market has clear direction, price can be relatively flat (1985-2004) or hyperbolic as during the 1975-1980 and 2004-2012 periods. We also know that major price extensions occur right at the end of a cycle when every small investor is drawn into participating.
The psychological impact of a fast moving market is huge as we have witnessed on many occasions in many different asset classes over hundreds of years. Last week we discussed How much gold should be held for ‘mainstreet’ to keep its trust in the monetary system. Financial market panics can happen with or without a gold standard. In 1907 the banking crisis happened whilst the US had a much more healthy level of public debt and owned gold at a 25% ratio to that debt. It is usually a convergence of several events that triggers a panic.
Today, central authorities worldwide, are using tools that have not been fully tested. If we look at gold holdings and public debt, Russia appears the strongest, by far. Europe (10,500 tonnes of gold) stronger than the USA even though 35% of Europe’s larger gold reserves countries (Italy, Germany, Netherlands etc) is still stored in the US. China does not release enough data to guage its true position. China is the Amazon of sovereign monetary management. Much of what is earned is re-invested abroad in order to grow its national industries. This has already led to monopolist status in several major area’s of everyday life including health. A smart reset of the present fractional reserve and shadow banking system will be necessary as fiat money will completely lose any meaning.
The position of Switzerland where much private gold is held can weigh heavily against confiscation in Europe on the assumption that Switzerland will act in the interest of its citizens who ultimately decide for themselves. Hence the chance of gold confiscation remains an outside one, at least in Europe. This by the way a good reason to own gold whereever one lives, as the risk of losing fiat in a bankrupt system is too high. The prediction for the Gold price is that we cannot predict where it will be drawn to or when, only that the Gold price is likely to come more in line with last weeks minimum of 10,000 based on a very conservative acceptation level of real money stored as insurance against the monetary base. The current risk weight timeframes still provide every opportunity whilst there is a ton of cushion. The technical story is no longer just about investment trading opportunity. It is about protection of wealth and health, and for that other ingredients play a role. In other words, if one can protect just 50% of average asset values recorded during then past 10 years, this may prove to be a major achievement.

Conclusion: The massive sovereign intervention in all financial markets and QE to infinity has now become a risk that requires more than applying a few technical tools. Price discovery is off the table as of last week.

The last time a French president initiated a major monetary event was in 1965 when General Charles de Gaulle decided to exchange all French dollar reserves for Gold at the standard rate of $35. It took until 1971 and an expensive Vietnam war(1955-1975) to see the result of that decision and the Gold standard became a huge hurdle for modern monetary finance.
Today’s situation with the Corona virus is bringing 80% of economies to a near halt and must inevitably lead to corrective measures never seen or tested before and no individual of above average intelligence can even begin to imagine what the effects will be.

No Change. Stay with full Silver allocation in portfolio.
THIS WEEK we also include the quarterly long term silver chart with risk weight from 1971 to 31/March 2020. 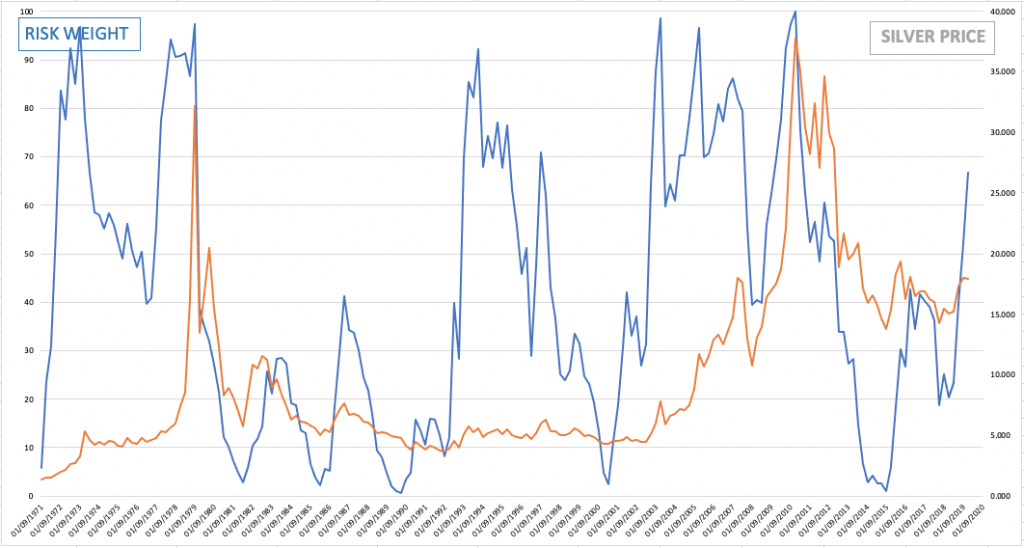 The bearish and bullish divergences are clearly visible in this chart even though signals don’t come until much after the event. The picture is very similar to gold with the difference that silver may have a much longer way to go. First to get even with gold from where is was the past few years and then making up to reach a ‘normal’ ratio. Price could be well north of 100 dollars in this scenario.

No Change. Keep a full 50/50 allocation or even overweight silver. Payback time will happen.
Silver is a commodity and attracts value added tax in most countries if delivery is taken. As long as it remains in bonded warehouse silver should be swapped aginst other asset classes including physical gold if inflation stops playing a role in price discovery, with a possible chance of still missing a huge profit opportunity in a price bubble scenario. I.e Silver drops to a ratio to gold of say 10 or 15. Being able to disengage at 40 or 30 ratio would be a major achievement at this stage and in our risk approach we shouldn’t be greedy with our own money and certainly not with other people’s money.

Previous week 27 March: No Change. Be patient and wait for the recovery to materialize.

Posted in A - All Financial Blogs | 2021 Forecast, GOLD / US DOLLAR FORECAST & PREDICTIONS.