24 April: Most short term signal favor the broader Crypto market cap to increase and this applies to Bitcoin. However this is short term whilst medium and long term risk are pointing down. Whilst Bitcoin is one of a key drivers for the entire market it only has that special quality of being the most promoted, hence receiving the most attention from investors. Many commentators attrributed last Sunday's drop to events in China but as we noticed already last week it may well have been a part of a large swap between BTC and ETH. The latter is holding up very well. Whilst crypto got hammered last weekend and again coming into this weekend, Gold and silver actually performed very well during the week, but also suffered a bit towards the close. The Bitcoin (Oranges) and Gold (apples) debate shows the importance of holding a minimum amount of precious to protect against certain very unexpected events. Many crypto tokens, away from BTC and ETH, have tremendous credentials but all suffer from a big speculative undertone. Dogecoin being the king of all. BTC still holds that same risk although we might finally develop a very minor interest in coming weeks or months as a small diversification from our main holding in BEST. This probably requires a more significant price drop and at least medium bullish divergence versus monthly risk. No Change.

18 April: In the red-eye hours of Sunday 18 April Crypto lost some 15% in a matter of hours. Bitcoin fell from 60k to $50,700 and is consolidating around 55k at time of writing. This is the 2nd largest nominal Bitcoin price drop. #1 was on 22 Febr, 2021 with 11k, and the #3 correction was 11 Jan 2021 with an 8k drop peak to bottom.
This sharp Bitcoin correction came with large volume trades and a quick observation learns that it may be one leg of a multi billion dollar swap from BTC to Ethereum and further smaller diversification. Sounds like a smart move and insiders will hopefully find the players behind it. Could even be concerted action. This shows the enormous price risk for especially smaller speculators. Those first time buyers for instance who bought at 64,000 of which there are quite a few. A strong correction healthy development in many respects. The Quarterly charts below show the interim Risk weight level with just 7 hours difference and could become a late bearish divergence chart pattern. We are in a short term downtrend that could turn into a longer term correction.
The size of the correction could be anything from the present (64,896-50,700)/64,896 = 21.9% to the kind of Bitcoin/USD corrections we saw in 2011, 2014, 2017 and 2019 which were all between 72% and 94%. These high volatility moves should already be rare with a mature asset like Bitcoin but it isn't and shows why markets that are psychologically strongly hyped by an ever increasing number of hyperwealthy influencers should be treated with respect and much care.
Today we are still happy not to participate. But we do love crypto and the quantum leap that Fintech offers for broader investment opportunities. We prefer to stick to placements with pan investment related industries. COINBASE may well be one of those in the near future just like our Bitpanda portfolio below.
As we mentioned in our Gold update yesterday, this shaky Crypto move today is very well timed with this BTC-Gold debate between Michael Saylor and Frank Guistra coming up on Wednesday 21 April via Stansberry Research. Looking forward to that although it is unlikely to impact our wealth preservation approach.
Where the Bitcoin herd buys into a strong inflation related narrative, without any element of greed of courser, Gold will catch up at some point. Where Bitcoin is a big bet with massive, yet decreasing, short term fiat currency profit potential, Gold is much less of a bet when it comes to finding equilibrium again. A huge switch from Crypto (Bitcoin) to Gold and Silver is maybe not imminent yet, but 'when', not 'if' it happens the move in favor of precious metals will be huge. Copper should continue to appreciate strongly. Not our play but we could see another 100% advance within 2 years.

If today's move proves to have been part of a single large swap the market is likely to remain more volatile for some time as others will follow in coming days and weeks even. If prices remain suppressed Gold and other metals are likely to benefit on Monday morning already.
No Change. 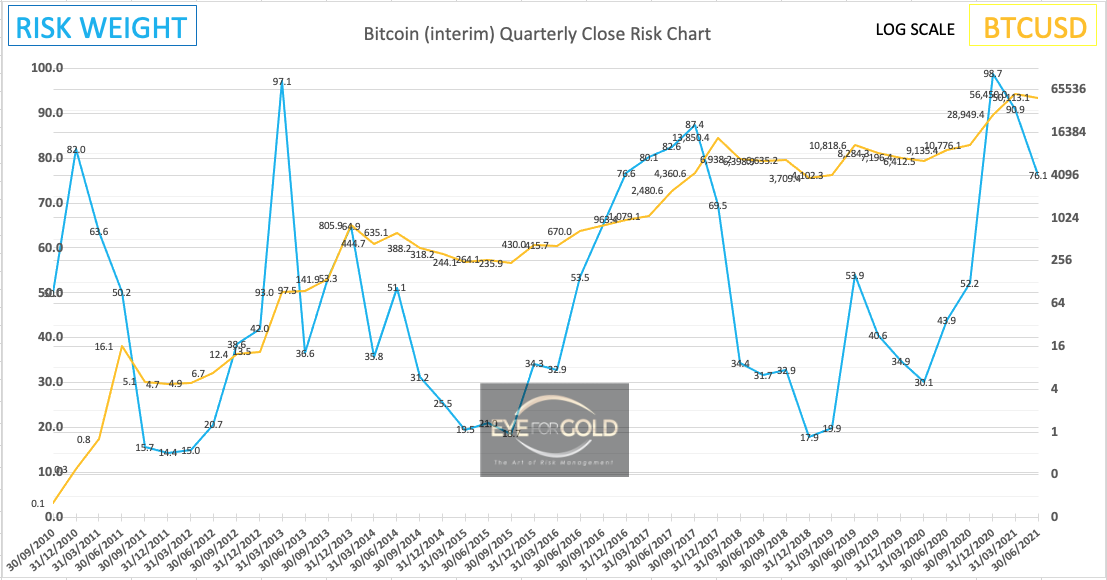 It was an important week for BEST as Bitpanda launched its fractional stock trading on Thrusday for 45 major international corporations. This created a massive price boost on Wednesday as BEST raced towards a high of €2,60. We understand that a few larger position were liquidated and this, assisted by a second general crypto market drop, pushed the price of BEST down by 27% from those highs into Friday before recovering towards a range close to the previous week's Saturday close (17 April). We do notice that BEST is reaching a bit of a longer term technical risk peak versus Bitcoin after having outperformed Bitcoin by 250% since September last year. With short term risk in deep oversold condition we do not contemplate any change to our portfolio yet except for diversifying the monthly (1%) BEST rewards as they come due on Saturday May 1st. To be eligible for rewards the account must trade to a certain minimum which generally works favourably using our short term technical minimum divergence confirmation between Hourly, Daily and Weekly time scales. Being aware that all crypto's have large inherent risk and prices can be under severe pressure. Our current cushion also allows for this to be absorbed.
We do have a long term target for BEST which for now is just called 'BEST higher'.
No Change.

18 April 2021: Last week was another top performer with a 30% advance to peak at €2.2490 finally closing 25% higher at €2.1490. Today's broad crypto market correction in the early hours did trigger a few large sales of BEST taking it down under €2.00 again, briefly touching 1.60 even and followed by a quick spike above €2.00 again. Bitpanda's Ecosystem token remains our favorite in this crypto space and we will stay with our full initial position looking to possibly add if the market drops towards €1.50 again. This is not just an early investor strategy and should work well if our short term technical indicators show low risk weight and bullish divergence vs long term. Technical tools, if applied conservatively, do work with many crypto tokens but only with long trades. BEST trading rewards were executed against fiat last week well above €2,00 and that is now the 'best' protection strategy for long term investors. The option is to reinvest the monthly rewards at choice or await new opportunity. We are likely to slowly increase our precious metals portfolio further.
Eagerly awaiting the Bitpanda announcements regarding fractional stock trading, a token development platform and multi exchange arbitrage possibility perhaps, any of which should take Bitpanda into the top league of a 'one stop shop' exchange.
Here too, a BEST price correction would be very healthy and offers potentially very profitable opportunities for a growing new population of BEST investors. No Change.

23 April 2021 close: The S&P now represents inflation pur sang. MMT may drive the index (much) higher still but it will not benefit the broader economy and possibily only a very small minority of people being rewarded from ZIRP corporate activity plus very long term funds that simply have little alternative other than government bonds or precious metals. Crypto market is still way too small for the truly large investment funds. With Medium and Long term risk weigh still at near maximum risk percentage this Index is still no option. Hopefully oportunity compensation and rewards can be realized by our Fintech crypto investments. No Change to staying out of equities.

16 April 2021 close: The S&P index remains very high risk as do many or even most of the underlying stocks. Technically it looks like we are at a tipping point given the extreme high risk weight levels, but nothing should surprise us as the unlimited flow of credit still pushes many larger listed companies to execute stock buy backs. No Change.

23 April 2021 close: Brent had an uneventfull week trading down from 68.00 to 65.50 closing in a fairly tight daily range at 66.05. Medium term Oil price targets are anyone's guess. We cannot see any material technical clue for future direction. Only short term trading is an option which is not what we typically do unless we diversify from an existing longer term hold. No Change.

16 April 2021 close: The B leg of the correction up did develop appears to be well underway. The strong advance last pushed Daily risk weight into high risk range again. Not a position to even contemplate a long position again. No Change.