31 January 2021: BTC looks technically very vulnerable, which is a primary reason not to invest. Given that Platinum still looks strong versus Gold with at least 50% price difference still to make up, and where gold hasn't begun to fill the first of 5 gaps against Bitcoin, short BTC long Platinum would be a logical choice for active traders who are still long Bitcoin at whatever level except the deepest cushions from last year's low ranges.
Circumstances are unusual in many asset classes and not easily understood either from a fundamental economic perspective. We would argue that Bridgewater's published interest in crypto is no reason to invest this minute as they are watching the same stats we do and must feel cautious on timing. And the best timing is during shakeouts of such highly volatile asset classes. We favor BEST and a few other crypto tokens as small punts. This Bitcoin market however remains highly interesting and sharply on the radar.

23 January 2021: This past BTC week (Sunday to Saturday) the average daily price range was 3,300 or 10%. What is happening is no doubt interesting and this is a market to be followed if only to learn from mass behavior.
Too many retail clients have entered this market and many are sitting on small losses, some are sitting on huge paper profits, but how will they react if Bitcoin continues on a downward path and how likely is that downward path?
The only reference to the latter is not the fundamental narrative on why Bitcoin is the 'only way out' from a manipulated and government controlled fiat market.

The first recorded trading day of Bitcoin was July 18, 2010. Price started at Zero and some 80 BTC was traded that day closing at 8 cents (or thereabout). It took 2 months for Bitcoin to generate a first 100% profit moving up from 10 cents to 20 cents on 15,000 volume before falling back to 10 cents again.
By the end of 2010 the price of Bitcoin was still only at 30 dollar cents. Volume indicated some early adopters and some of those probably still sit on a 100M paper profit today having taken some coins off the table along the ride whilst enjoying extra benefit from a free Bitcoin Cash fork in 2017.

And the question is; can Bitcoin again fall an average of say 85%? Will it happen a fifth time? If so, what will that do for Precious metals, retail and other investors who tend to buy closer to tops and sell closer to bottoms. No one wants to lose 25% let alone having the uncertainty of much more, which is entirely possible given the historically short Bitcoin price print. Precious metals are very likely to benefit as the lobby in that space will be formidable if the major Crypto currencies indeed make that correction. Even though large instutions have started to embrace Bitcoin, the real the weight of those institutions and their CIO’s needs to be proven.

Bitcoin is very benefical for early adopters with a large cushion. The type of risk that one takes stepping in half way a major trend is still huge as per the above Bitcoin history. This is why we do not advocate this high risk market for wealth preservation and have waited a few years until Q3 of 2019 to choose a local European exchange development, Bitpanda's BEST and there are other Token offerings with a lot of potential. Most of them are likely to fail though for the benefit of a few that represent true revolutionary decentralized trading and accounting systems. There are some names out there which look to offer much more investment potential than Bitcoin. Tokens that could still develop a 1000x and more potential.

If, as an example, Bitcoin drops to $10,000 and then gaines some 1,000% again the price would be just over $100,000. One has to wonder what that fiat dollar value really means for mainstreet in terms of inflated consumer values. If that were to happen in the next few years or quicker, hundreds of millions of FOMO people would start buying just about anything crypto including Bitcoins and probably make a relative killing driving inflation to hyperinflation followed by the biggest reset and economic contraction ever that may last decades.

Beware as of all the above can happen, with or without Sars Covid, with or without Trump, with or without regulation.
Having said that, the current technical picture is a developing bullish divergence between short term Daily risk weight and Medium Weekly as well as Monthly, both in intermediate high risk down trends. Impossible to say who will come out on top. This entire space is extremely interesting and very serious, but a very hot kitchen.
No Change until maybe a fresh potential bull run from much lower levels. 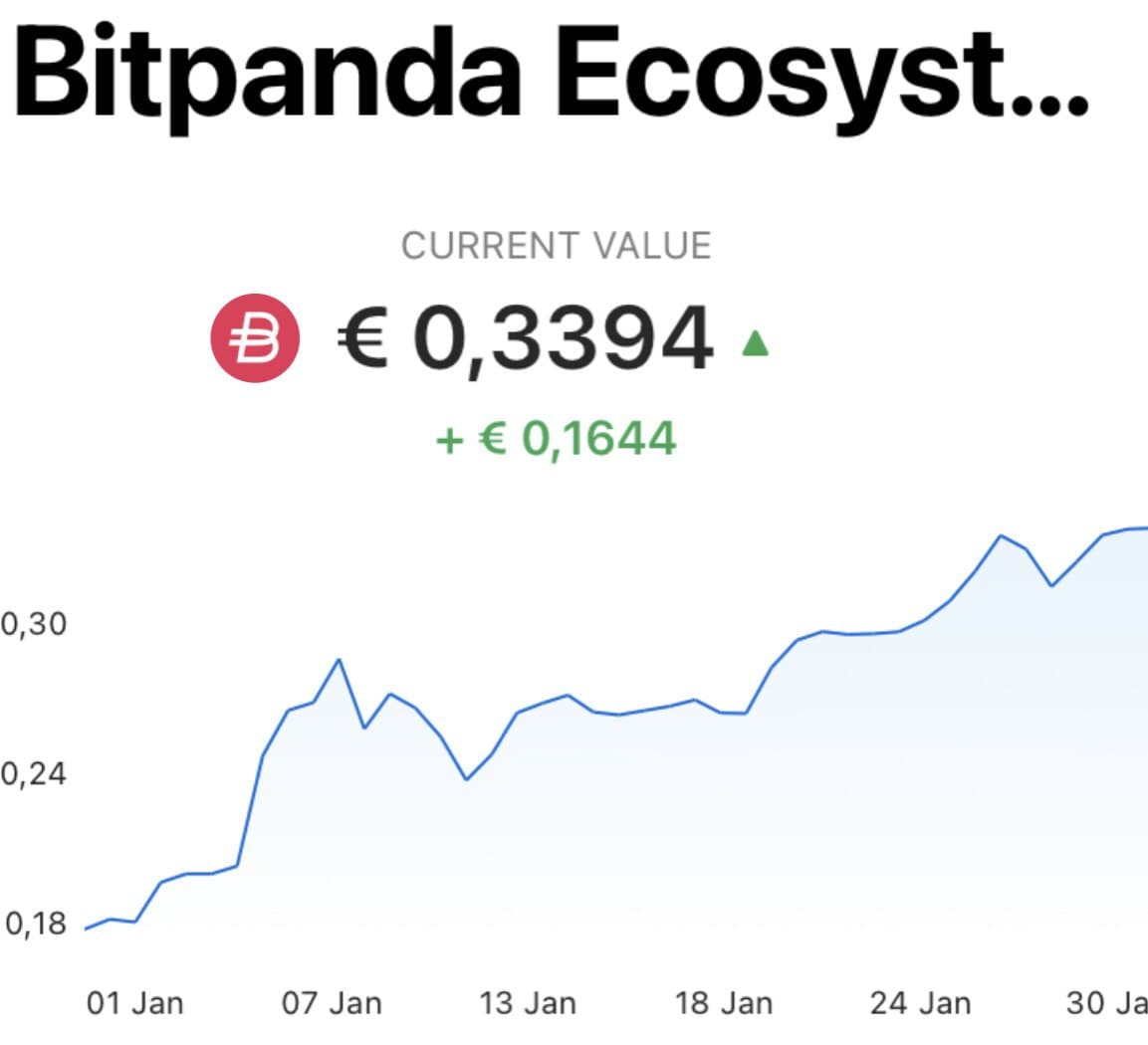 31 January 2021: The above BEST performance for January was printed on 31 Jan midday. The January performance of BEST seems to come close to 85%, making it one of the better performing crypto tokens in the crypto exchange and DeFi space. BEST of course offers one of the better reward structures which can only be enhanced through future expansion of carefully listed tokens on the Bitpanda Exchange. Another major benefit of this exchange is the possiblilty to trade 100% physical backed precious metals on competitive terms and which gives Bitpanda an edge for account holders to keep funds on the platform paying significantly lower trading and storage fees.
One week ago Bitpanda announced the launch of a Bitpanda VISA managed Debit/Credit card allowing wireless and other digital expenses of up to €10,000 per day. These expenses can be offset against any wallet with enough funds including fiat currency. This is not far from a 'no brainer' and should drive more investment interest in the BEST token as BEST holders will benefit from additional discounts using the card for day to day consumer and larger purchases.
Technical analysis remains uncertain due to the limited available data since the August 2019 start. We yet need to see a major top in Medium term and Long term timescales. Our cushion since entry is substantial to allow this market to mature and discover the results from Bitpanda's rapid growth in human resource and the many development programs undertaken. Due to the nominal advance of BEST since October we have raised the portfolio allocation to 20%, pushing BEST to an equal footing with Silver.

23 January 2021: Best tokens are in upmode again and have been so for several months every week even though technically we have seen a few minor and one major contraction in week 1. Last week was generally slow until the token was driven some 15% higher on Thursday and Friday before closing this Saturday below the €0.3100 peak at around €0.2950.
The Breaking News this week on the Bitpanda platform and directly benefitting BEST holders is the introduction of a debit card under the VISA label offering the current 1,5 million accountholders to pay online shops and physical shops with this Bitpanda VISA credit/debit card against any crypto asset or precious metals and any of 5 major fiat currencies held in their active wallets on the Bitpanda platform. For anyone active in the decentralized token space in Europe this is an important supporting asset that bridges crypto/precious metals with the regulated monetary system. In fact, Bitpanda is the first major investment exchange having established a consumer banking facility that is very cost effective and especially for holders of BEST and they reap certan additional rewards. The card will start being distributed in February 2021.
We have increased our Crypto portfolio allocation from 10% to 20%. This may include other crypto assets, excluding Bitcoin, traded on the Bitpanda exchange, not just BEST. No Change.

Markets on permanent watch by Eye4Gold

16 January 2021: In Crypto we have adopted the Week to start on Sunday in our European timezone. At weekends we observe that trading may be fairly continuous with varying volumes and often a gap of 2 or more hours on a Saturday or Sunday. BEST outperformed most of the major crypto currencies with exception of a few tokens like Polkadot, that showed an impressive advance, becoming the 4th largest MCap crypto this weekend. BEST actually has a wider interest coming up in that same blockchain net work protocol space. Being part of what may become the largest crypto exchange in Europe we are commited to this token. It is technically possible that BTC and Ethereum alike correct further into the 20,000's which could have a negative herd effect on crypto prices across the board. Irrespective of where crypto currencies halt their corrections a fresh technical oversold indication would be a strong signal to consider increasing our BEST position. No Change for now.

29 January 2021 close: Standard and Poor's 500 index peaked with a new all time high on Tuesday but lost over 5% from that peak closing near the lows. With Monthly risk weight narrowing to 93 from 95 but still going up this is a signal for potential weakness. No Change

22 January 2021: The S&P closed 2.1% higher on the week and has already reached log scale inflationary status. In terms of cash allocation this market as most other equity markets world wide continue to show high risk. Equities have become more speculative than ever with a high degree of retail participation. The contrarian signs then usually become 'high alert'. It does not mean that an hyperbolic blow off top cannot happen. It certainly can and price levels could be substantially higher still in months to come. This market should be not be entered at high risk price levels if one isnt already in the market with a very substantial cushion. This even more applies to Crypto where daily price ranges of 10% or more are more common than not. No Change except that we have reduced our potential porfolio allocation to global equities from 30% to 20% max.

15 January 2021: S&P closed 1.4% lower on the week. Half way January our interim Monthly risk weight is still trending up but looking vulnerable. Unfortunately this index remains high risk in our conditions for allocation. No Change.

31 January 2021 close: Brent Crude Oil market pricing still gives no strong signals in either direction in spite of Long term Monthly being in an uptrend. Weekly now offers a contra market downforce. With daily neutral and hourly getting oversold, this looks like a short term trading market only. We stay on the sidelines. No Change.

22 January 2021: Brent closed a touch higher this Friday at 55.17. Brent Oil is a market that cannot be traded without taking too much risk. This is both technical and fundamental and there is too much economic uncertainty towards both storage and use of crude. It seems that there is more than enough oil to support the slower economic conditions in most parts of the world including working from home and curfews.
So, no change for now and we hold off until we see a real hard technical bottom to invest again.

15 January 2021: Brent Oil lost 2.5% for the week with Daily and Weekly risk frames turning down. Oil may be pushed a little higher again due to winter related increasing gas prices, but overall risk remains in favor of standing on the sidelines. No Change