11 September: Bullish Divergence between Daily and Longer term risk weight frames typically drives the highly opportunistic BTFD strategy. However, with Medium term Weekly and Long term Monthly risk weight showing multiple times bearish divergence in their own time frames and visible in all our technical tools, this market remains high risk and caution (= out or small no leverage) must be the correct approach to preserve. If it weren’t such a tricky environment there wouldn’t be so many opposite views, so much discussion on (a)social media and even a complete change of mind by some commentators. Hence no participation based on strict risk management rules as even the best fundamental analysis only works if you get your timing right. So we’d rather be wrong and out than sorry. No Change.

4 September: RSI, MACD and Stochastic all continue to show the potential or an already turning down of risk weight. This is just so bearish that no sane person should risk any sizeable portfolio allocation to this market. Yet a few long term stock market bears are turning bullish. This is a sign for contrarians to be especially concerned that ‘even this maket’ will end its run one day. Turning bullish at this elevated levels makes us remember the bankers that finally turned bullish on the USDollar exchange rate back in 1985. We’ve never seen those levels again, ever against the other majors. Technically the S&P is violating technical rules if wisdom, hence a confirmation of the total manipulation eventually leading to massive losses for the Robin Hood type traders resulting in hardship whilst the economy hasnt even begun to recover in earnest and may not do so for several years. No Change.

11 September: We anticipated the gap down open early March to be filled and got out of our hold on a losing position. The technicals are fairly neutral at this point with a strong risk of further price erosion as Weekly is in a downtrend and Monthly risk weight narrowing for a possible downturn. High volatility with rapid price movement risk if such a down turn develops is best avoided. No Change.

4 September: We did roll over into a fresh short term bear market and it now remains to be seen whethewr it will last into medium term or longer. The medium term onlyu shows mild bearish risk tom price divergence on the Stochastic tool with RSI turning down and MACD converging to turndown as well. This is higher risk visual that demands caution. We stay out.

11 September: In September 2018 we pulled this chart of BTC CFD and marked the gap openings all of which but one were filled. As the chance of a gap fill, usually early and sometimes late, is near 100%, we pay high attention to the risk of that final gap at around 2880 from August 5, 2017 being filled at some point. See chart below: 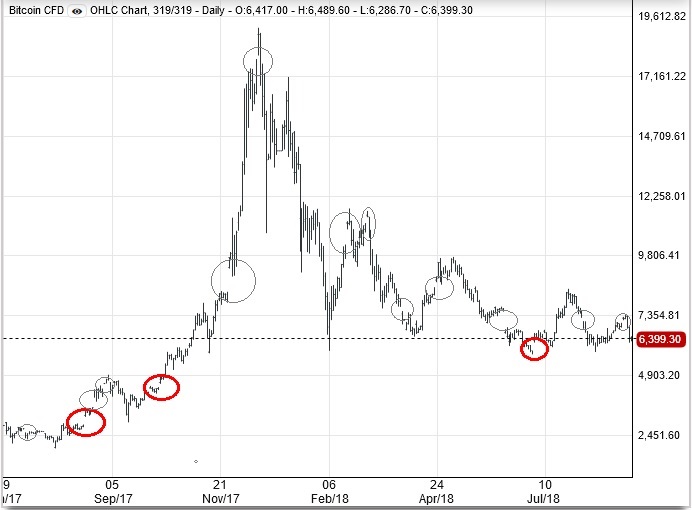 The two other red circled gaps on this chart were both filled in November 2018 and the final remaining gap at 2880 has not yet filled. It may never be filled of course, which would be unusual. The sheer speculative price volatility of BTC however makes that risk greater and present highly suspicious financial market conditions should keep BTC investors on alert. This whole environment is one big hot kitchen that could inflame, then drowned before it settles as a new normal for digital fiat perhaps as many believe will be the case. Hence the BTC 1 million level is a joke with all things being equal as it would amplify an unacceptable wealth transfer leading to havoc. Unless of course Zimbabwian hyperinflation develops without a Bretton Woods type reset. In that case Gold might probably be worth 1 Billion/ounce. Very unlikely. No Change.

4 September: This market remains very much under the influence of younger to middle aged early investors who have made their fortunes with returns in the 1000’s of percent. Because anything can happen to this market under the weight of an near impossible G10 task of repairing the Debt burden before it’s too late, we keep it simple. As 99.9% of serious Gap openings are filled why wouldn’t BTC, given it has no real purpose other than its strong appeal to a number of mainly post 1980 born investors. Maybe they’re right and maybe not. and yes, BTC could go to $ One Million if the G10 fiat market implodes to Zimbabwan type scenario. The latter doens’t seem likely although Western and Eastern economies screwed up big time during the past two decades in particular. We stay Safe and Out.

11 September: Bitpanda’s BEST is holding but hasn’t yet visibly found that stronger foundation. In the meantime BEST offers an actual return for anyone trading on the Bitpanda exchange, which in our case is only Precious metals, with the additional benefit of a discounted commission charged in BEST at a value of €0.12, so owning BEST at €0.08 offers a 30% commission discount besides the monthly BEST rewards based on volume trading. We stay with BEST with a limited risk allocation as there are very few alternatives in the crypto space that can fill the void between unregulated or much smaller regulated crypto exchanges and fiat currency. No Change.

4 September: A bit unfortunate to see BEST truning back down under 8 Eurocents, but it doesn’t look bad at all. A new dive looks like a great technical and fundamental opportunity to acquire some tokens and receive a strong return on investment. Any trading will be rewarded with free tokens representing a real interest rate. Plus any commissions, if paid with BEST tokens are charged at 12 Eurocents, making the commission level paid on crypto currencies and precious metals quite attractive with commission discounts of up to 50%. BEST is now also traded on Hong Kong’s HitBTC exchange. This makes it a potentially more speculative instrument which could increase BEST volatility. No Change for now based on favourable technical indicators and risk weight waiting to fund a short term bottom.